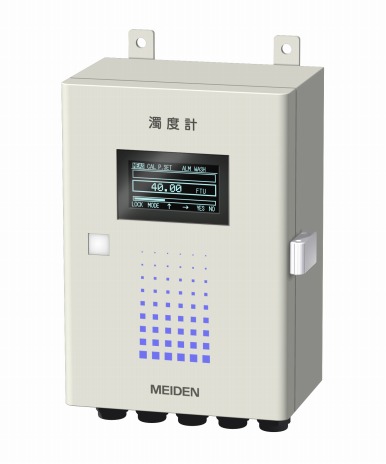 Turbidity is a very important index to know the pollution degree of water.

In recent years, environmental pollution caused by industrial wastewater and household wastewater are on the rise and a wide range of areas requires measurement of turbidity including rivers, lakes and seas as well as water and sewage treatment plants.

Our highly sensitive turbidity meter is a consecutive water quality meter suitable for low-turbidity management of filtrate water and water supply at water purification. In addition, our turbidity meter is effective for responding to the interim guidance stipulated by the Ministry of Health, Labour and Welfare.
Low turbidity at 0.1 degrees can be measured with accuracy and longterm stability by adopting a side-way scattering system in which laser source is used as the measurement method.
Unlike the particulate counter system, converting the number of particles into turbidity and strict control of flow rate of water sample are not required, providing high sensitivity while remaining faithful to original measurement principles. 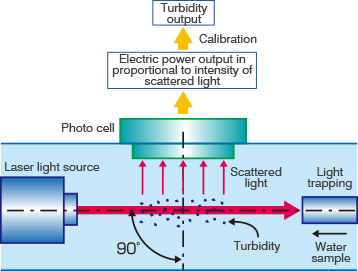 Our turbidity meter can be used for consecutive process by directly immersing the detection part into the water sample.

Combined sewer overflow (CSO) turbidity meter is a sensor allowing organic contamination concentration of overflow when it is raining to be measured automatically and consecutively. It is possible to grasp the influence of environment on the existing facilities by measuring the turbidity load concentration in the pipeline. This advantage contributes to formulation and evaluation of measures for improvement of combined sewer systems. The combined sewer overflow (CSO) turbidity meter is jointly developed with Tokyo Metropolitan Government Bureau of Sewage and Tokyo Metropolitan Sewerage Service Corporation. 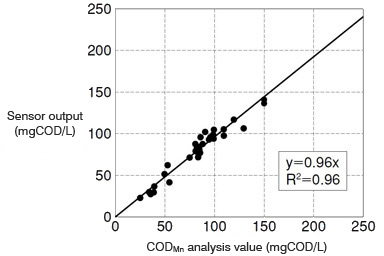 Example of installation of rainwater outlet

Combined sewer overflow (CSO) turbidity meter and water level indicator are installed within the trunk flow passage.
The detector rises with the float according to rise of water level and the detection part protrudes near the overflow and performs measurement. The measured value can be monitored as a real time trend on Web via the monitoring system utilizing the mobile phone network.

Products related to this product