2017-05-09
Technologies that were jointly proposed by Meidensha Corporation (Meiden) and Kobe City in Hyogo Prefecture have been adopted for the Breakthrough by Dynamic Approach in Sewage High Technology (B-DASH) Project sponsored by the Ministry of Land, Infrastructure, Transport and Tourism (MLIT).

The ministry will fund a feasibility study for realizing a groundbreaking, energy-saving sewage treatment system that removes nitrogen from sewage using anaerobic ammonium-oxidizing (AMX) bacteria. The discharge of sewage containing nitrogen into rivers, seas and other public waters can cause harmful algal blooms, often known as red tides.

Although existing sewage systems have been credited for improving the quality of public waters, they consume massive amounts of energy. Given this, developing technologies that use less energy but still remove nitrogen from sewage is regarded as a challenge that must be addressed. 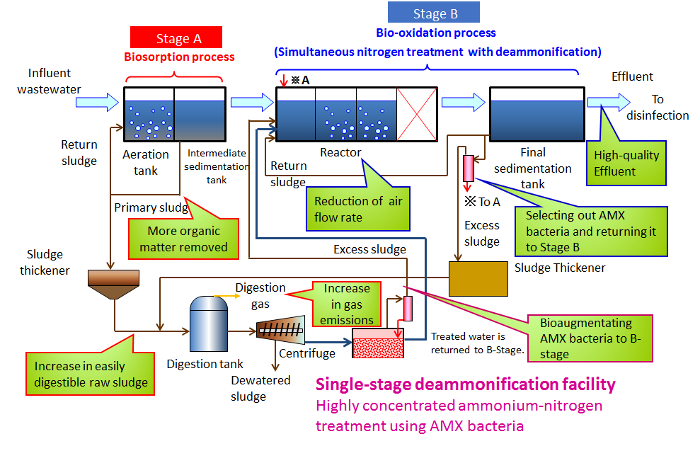 The feasibility study, a precursor to real-scale verification, will cover the following:
1. Technologies to efficiently collect as much organic matter as possible from sewage for fermentation in a digestion tank, to increase the emission of digested gas.
2. Technologies to treat water containing highly concentrated nitrogen–which is produced by sludge treatment–with AMX bacteria, to reduce the load from nitrogen that had been discharged from the digestion tank.
3. Technologies to send excess AMX bacteria generated in No. 2 above to a sewage-treatment reactor tank, to reduce the amount of air needed for aeration and remove nitrogen in the tank.
Through these technologies, Meiden and Kobe City aim to reduce the amount of energy consumption used in sewage treatment. In this study, Meiden’s single-stage deammonification facility will be used for its high maintainability.

The B-DASH Project was launched in 2011 by MLIT to facilitate the development and commercialization of new technologies in sewage treatment projects that promote energy saving and the effective management of sewage infrastructure to reduce associated life-cycle costs. Through these policies, MLIT is helping Japanese companies expand their water-related businesses abroad.

Recipients of MLIT funding will conduct experiments to verify new technologies using a real-scale facility or, as a precursor to this, conduct studies to determine whether the technologies perform well enough or are cost-efficient enough to be used widely in society.

Meiden will strive to support the improvement of social infrastructure by developing innovative sewage treatment technologies.