Meidensha Corporation (Meiden) supported the holding on March 4, 2019, of a concert by NHK Symphony Orchestra to commemorate the 100th anniversary of the founding of Hosui Elementary School, which is run by Shinagawa Ward, Tokyo, as well as the completion of its new school building.

How Meiden is connected to Hosui Elementary School

Meiden’s connection to Hosui Elementary School dates back to the Taisho period (1912–1926). Meiden, which was founded in 1897, established a factory in 1913 in what is now Osaki, Shinagawa Ward, as its business expanded. In those days, Osaki was an impoverished village with only two elementary schools. Children living near the factory thus had to commute to elementary school far from their home.

Meiden founder Hosui Shigemune, who saw how children had to commute long distances, wanted to build an elementary school for children of his employees and local residents, but died in 1917 at a young age of 44 without realizing his wish. His wife, Take, who became the second president, provided her own money to build the four-year Hosui Elementary School in his memory in December 1918, a year after his death. The elementary school was then donated to the municipal government. Even after 100 years, the founder’s name is engraved in the school’s name.

The March 4 concert was held at the school’s new gymnasium, which was completed in February 2019. The first section featured seven pieces of music including, “A medley from ‘Frozen’” and “Bugler’s Holiday,” played by five brass instrument players from NHK Symphony Orchestra. The instruments were the trumpet, trombone, horn and tuba. In the second section, children from Hosui Elementary School’s brass band club joined the NHK Symphony Orchestra members to play “A medley from a march to the school song” and “Treasure island.”

About 500 students at the school, their parents and teachers enjoyed the live music at the concert lasting approximately one hour. 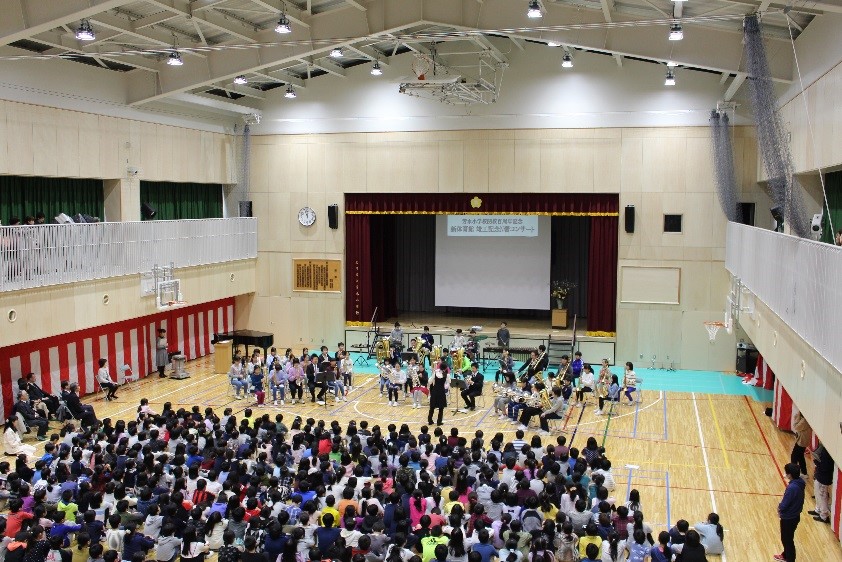 In addition to music programs like the latest one, Meiden has been conducting activities to serve communities by holding events to make children become interested in science, such as “Meidensha Monozukuri Kyoshitsu (Meidensha Workshop on Manufacturing)” and “Rika Taiken Gakushu (Hands-on Science Learning)” for sixth-graders.

Meiden will pursue the same passion for manufacturing held by its founder and his spirit of “for society and for people” and continue its activities to pass on the “manufacturing mind” to future generations.