Meidensha Corporation (Meiden) has completed the design, production and installation of a hydropower generation system at the Yamba power plant in Agatsuma-gun, Gunma Prefecture. The project was commissioned by Gunma Prefecture’s Corporate Bureau.

Meiden won a contract to deliver a package of works for the design and production of equipment of a 12,600kW horizontal shaft double-runner Francis turbine, a 12,400kVA horizontal shaft synchronous generator, a gas-insulated switchgear, a main transformer, adistribution and control panels, as well as installation, testing and adjustment works for all those works.

One issue that the power plant will help address is the fluctuation in the amount of water flowing from the dam in different seasons. To that end, Meiden adopted the horizontal shaft double-runner Francis turbine, which has two wheels, for one generator. The turbine is automatically controlled to generate electricity in the most appropriate operational mode in proportion to the amount of water any given time.

Power generation projects in Gunma, a prefecture with abundant water resources, are centered on hydropower, a clean energy source which does not emit carbon dioxide (CO2) when generating electricity. The Yamba power plant is the 33rd hydropower station run by the prefecture. It is a dam-type power plant which generates electricity by making use of water released from the Yamba Dam in the Agatsuma River. With a maximum output of 11,700kW, the plant generates about 42 million kWh annually – enough capacity to provide electricity for about 12,000 households.

Gunma Prefecture offers a scheme, called “Dengen Gunma Suiryoku Plan” (hydropower plan for the electricity source of Gunma), which is designed to provide CO2-free electricity generated at hydropower plants run by the prefecture – except those subject to the central government’s feed-in tariff scheme for renewable energy sources – to business operators in the area. Meiden’s Ohta Works, which is located in the city of Ohta in the prefecture and is one of the firm’s main production bases in Japan, has started procuring CO2-free electricity under the scheme.

Following the Japanese government’s pledge to go carbon-neutral by 2050, there has been a growing interest in decarbonization in the country, prompting moves to introduce renewable energy. As a nation with abundant water resources, Japan is expected to make more use of hydropower.

Meiden endeavors to receive more orders for projects to refurbish existing hydropower plants both at home and abroad and contribute to spreading the use of hydropower and other forms of renewable energy, helping achieve the goal of a carbon-free society. 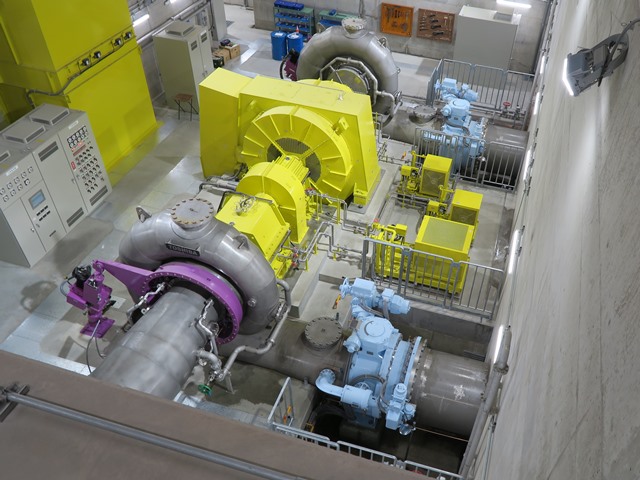